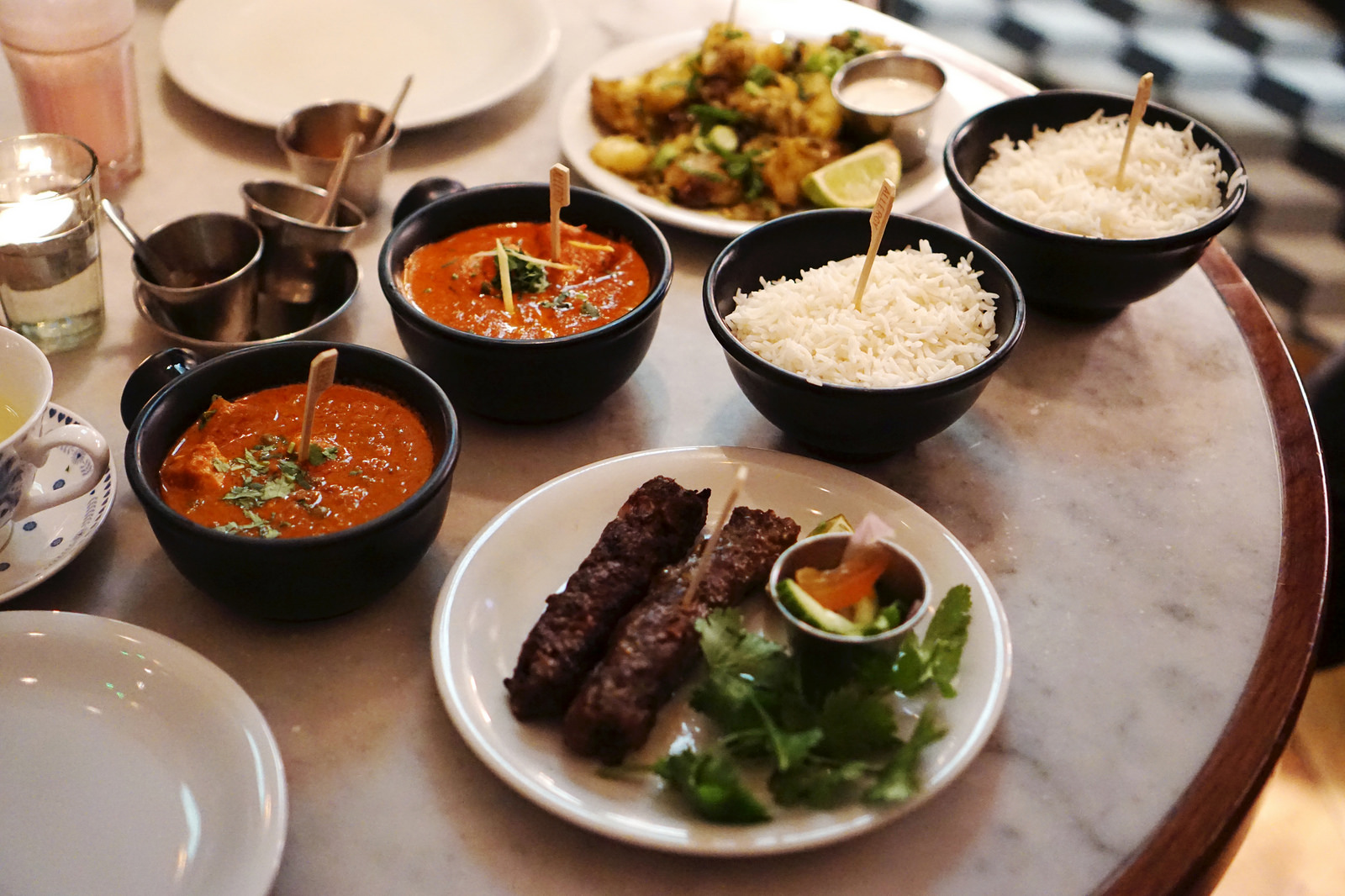 I finally got around to trying Dishoom; a small-ish chain with most of its restaurants in London (Kensington, Shoreditch, King’s Cross, Carnaby and Covent Garden), but also one in Edinburgh. It’s often described as a Modern Indian restaurant, but it turns out that Dishoom is modelled after old Iranian cafes that were prominent in Bombay back in the days. And as such offers a different take on Indian cuisine. I did feel, as I ordered lamb kebabs, that some options were not your typically Indian dishes. And the same goes for the decor. So when I later read this story on their website, it all suddenly made sense.

My boyfriend and I went to the Covent Garden branch, right around the corner from Leicester Square tube station. And the first thing I have to say is – and I don’t know how usual or unusual this is – but it was packed! Long queues the entire time. On a Tuesday afternoon! So prepare to wait or call/book in advance if you plan to go at busy times.

But even if it’s busy, the atmosphere is surprisingly nice and cosy. We both loved it despite not having the best table. Something about the high ceiling, the lighting and ambience in general was just right.

Is Dishoom safe for Coeliacs?

Yes, they have a gluten free menu and an excellent knowledge of cross-contamination. And before I even get into what food we had, I have to say the service was incredible. One of the most helpful and attentive servers I’ve ever had.

He took the time to warn us about a ‘gluten free’ starter they prepare near the bread making area. It’s all separate and technically okay, but with flour flying around nearby, he didn’t personally recommend it for coeliacs and those with a severe allergy. He even let us know about some dipping sauces that are gluten free, but not made in house. So without being able to confirm what environment they’re made in, I could choose to avoid them to be on the safe side. I appreciated his dedication to making sure our meal was safe. And that to me sounds like a restaurant who takes their allergy training seriously! ?

Now on to the food.

As soon as you get the menu, you can tell it’s not like the average Indian restaurant. For a start there are only two curries! The concept revolves around small-ish plates that are perfect for sharing. They recommend about 3 dishes per person so we went for both curries (chicken ruby and mattar paneer), 2 portions of rice, sheekh kabab and gunpowder potatoes.

To be honest the portions are actually quite good and we ended up with way too much food! One rice would have been more than enough for a start. Even my boyfriend couldn’t finish. So bear that in mind when ordering. It’s best to start small and order more as you go along.

Overall the food was nice, there’s a good amount of gluten free choices and there’s even a breakfast menu which I look forward to trying.

My favourite was the ruby curry, which is basically butter chicken (or chicken makhani). I usually prefer my curries spicy – this one is very mild, rich and buttery – but it was tasty and the chicken was so tender. The mattar paneer was good too (always one of my go to curries), but I did think to the paneer was a bit softer than usual.

In second position was the sheekh kababs – grilled lamb in a lime, coriander and cumin marinade. Again the meat was very tender and I loved the huge bunch of fresh coriander they came with. You can never have too much garnish! The flavours were delicate and could have been stronger, but it worked well as a side dish that way. I would definitely take these again.

And finally the gunpowder potatoes – buttery smoky-grilled potatoes that come with freshly squeezed lime juice and  a yoghurt dressing. I thought these were simple, but yummy and made for a great carb side with the curries. It’s a nice change from rice if you want something a bit different.

For more info, you have can a look at their website {here}.