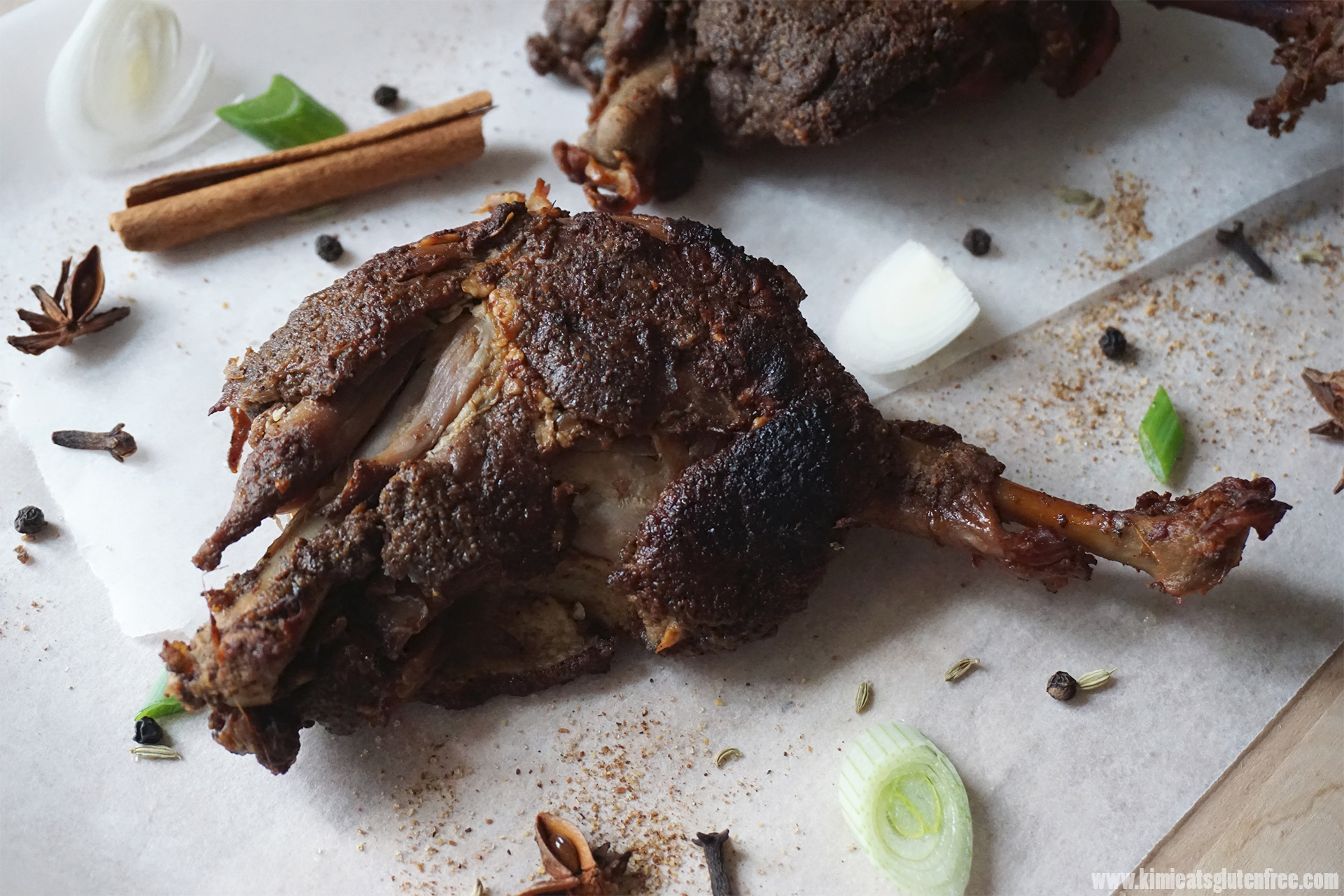 If you miss Chinese take aways – and let’s face it, if you’re gluten free for medical reasons then it’s probably a given fact that you do! Unless you’re one of the very lucky few who has a gluten free/cross-contamination aware Chinese restaurant nearby (but most of us are still patiently waiting for that day to come!) – this recipe is a must.

While this dish is a classic and it tastes just like I remember, I won’t lie… it will never feel like those cosy, deeply satisfying Friday take away nights in, relaxing while tucking into some crispy duck pancakes… Oh no. Because get ready to spend ages in the kitchen to get this beautiful dish on your plate! And you’ll have to suffer through the unbearably delicious Chinese restaurant smell making you hungry the whole time as well. haha Don’t get discouraged though, it’s worth it! 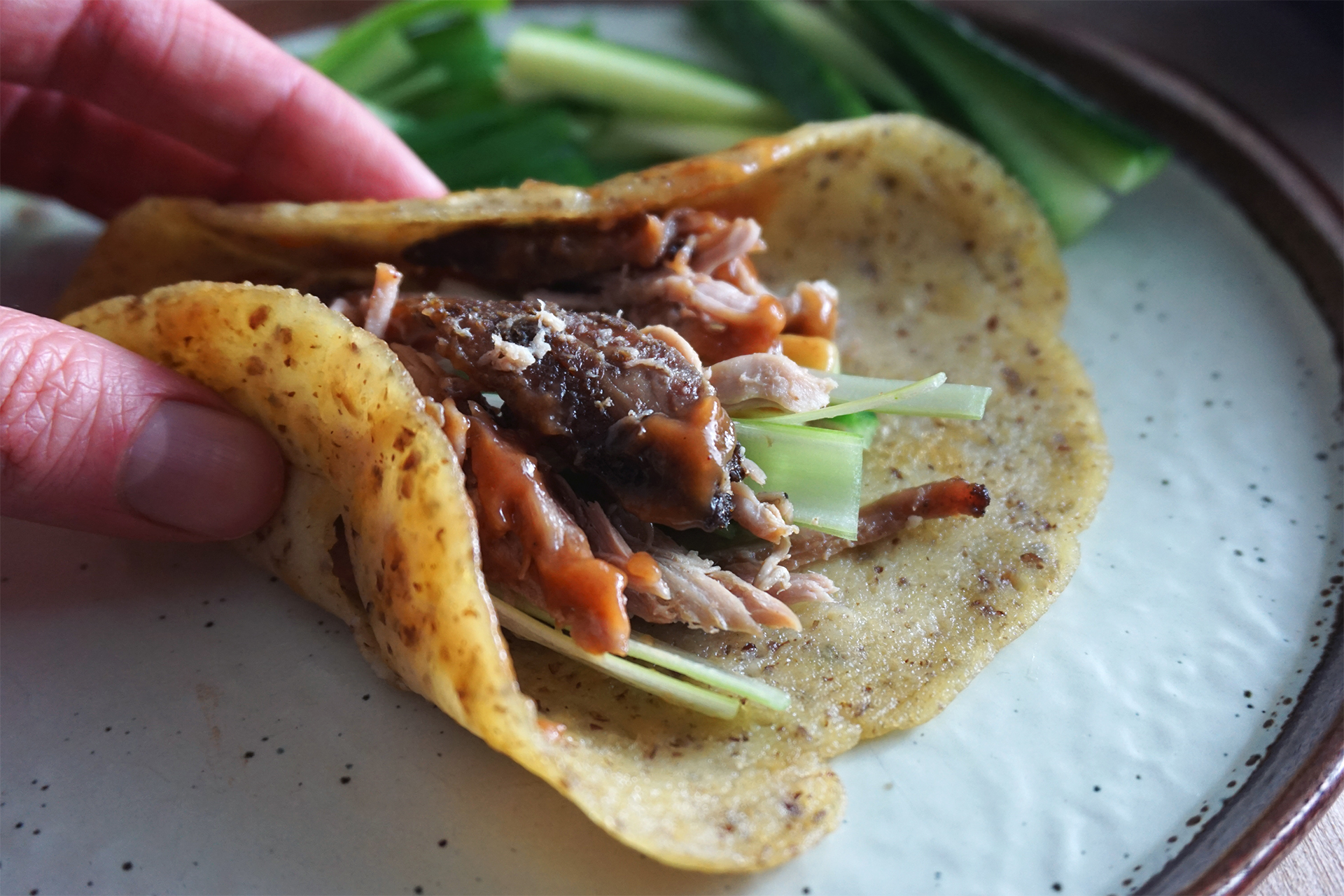 I’m also exaggerating a little. I put this recipe down as ‘medium’ for the difficulty level, but it’s not that the dish is hard to make in itself. It’s actually really easy, technically, it’s just time consuming. You have to poke some holes into the duck legs, rub the spices into them, let them marinate for ages, boil them for ages and then grill them. And then you have to prepare whatever else you choose to have it with. Basically it’s easy, it mainly involves spending a lot of time waiting.

And that’s exactly why I made a big batch (6 duck legs). I don’t know about you, but as delicious as it is and as much as I miss being able to tuck into a proper tasting Chinese restaurant dish like this, the reality is that I’m just way too lazy to cook recipes like this regularly. So I like making the most of it when I do. Having leftovers in the freezer makes all the time and effort spent feel so much more worth it!

While crispy duck is famously eaten with paper thin Chinese pancakes (and by all means you can give it a go), I’m not a huge fan of any gluten free version I’ve attempted so far so I won’t include a recipe here. I basically just make standard thin crepes (as seen in some pictures) and it’s really not the same. BUT the good news is that there are many other ways to enjoy crispy duck (many of which I would say are actually even better):

The possibilities are endless. 😉

You can make the hoi sin sauce from scratch (if you choose to have it with the standard pancakes and hoi sin sauce), but if you have a Chinese supermarket nearby I recommend having a look in there first for Ayam’s gluten free version. This is the one I use and the only gluten free hoisin sauce that I know of (let me know in the comments if you know of any other!?). 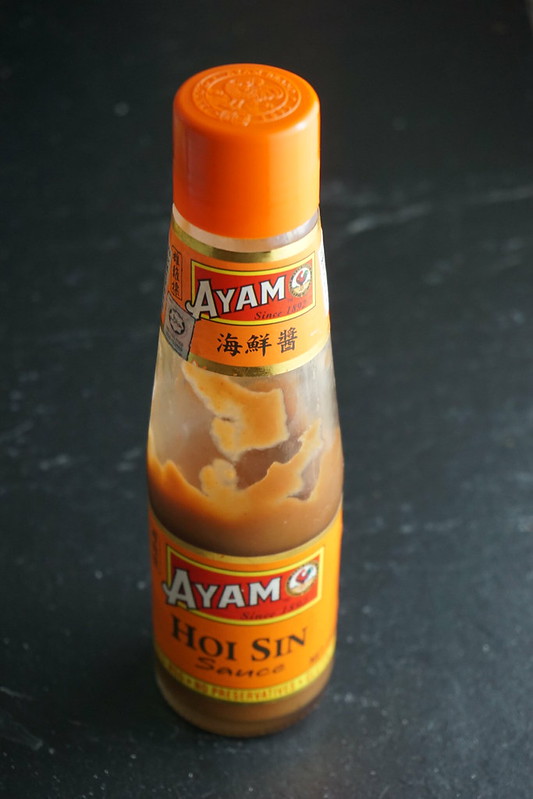 As for the Chinese rice wine, this is yet another classic Chinese ingredient notorious for containing gluten. A while back I actually stumbled on a couple of brands that make a gluten free version! I was really excited because it was the first time I had ever seen this, but unfortunately the shop in question had none left when I went back. And they haven’t had any since then either so if, like me, you can’t get your hands on a gluten free Chinese rice wine, it’s ok! You can use dry sherry instead.

For the soy sauce, I know a lot of people often substitute with tamari and that’s perfectly fine in some cases, but they don’t actually taste quite the same. For a dish like this I would recommend using a ‘proper’ gluten free dark soy sauce instead, if you can. Again, always check Chinese supermarkets first if you have one nearby. They tend to sell a few different gluten free soy sauce brands and on top of being better, the bottles are often much larger AND cheaper. I use Datu Puti: 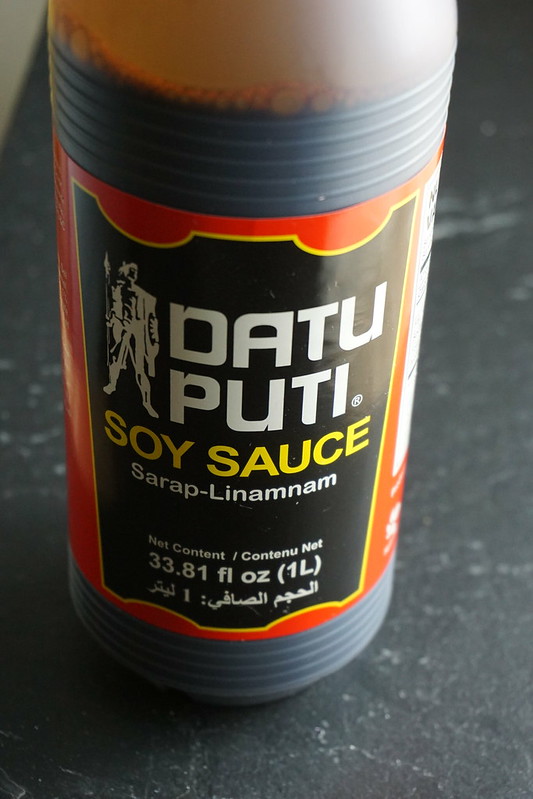 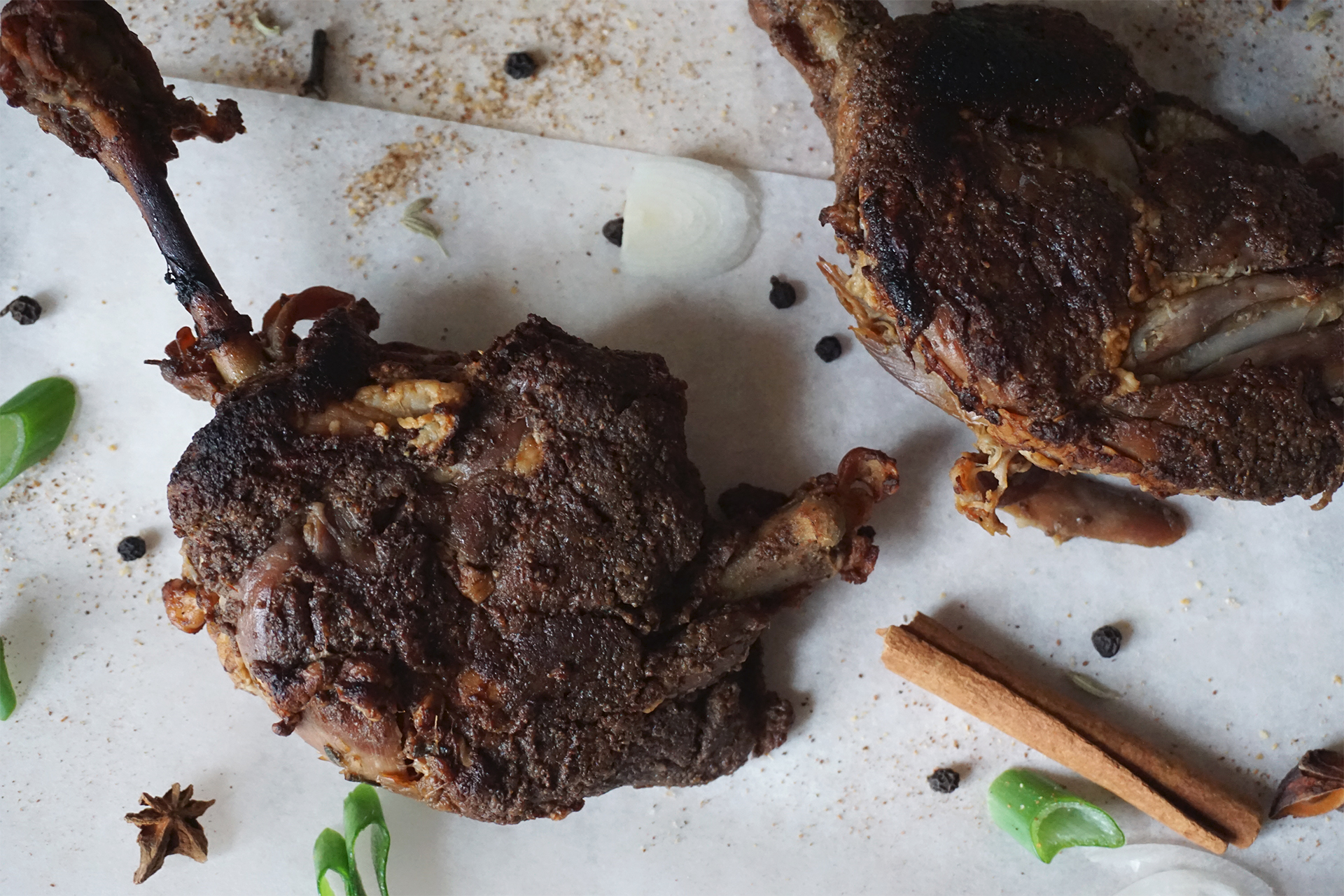 Difficulty level: medium (mainly because of how time consuming it is)

Note: don’t discard the leftover juice from boiling the duck. You can use it to make a tasty Chinese gravy or sauce! 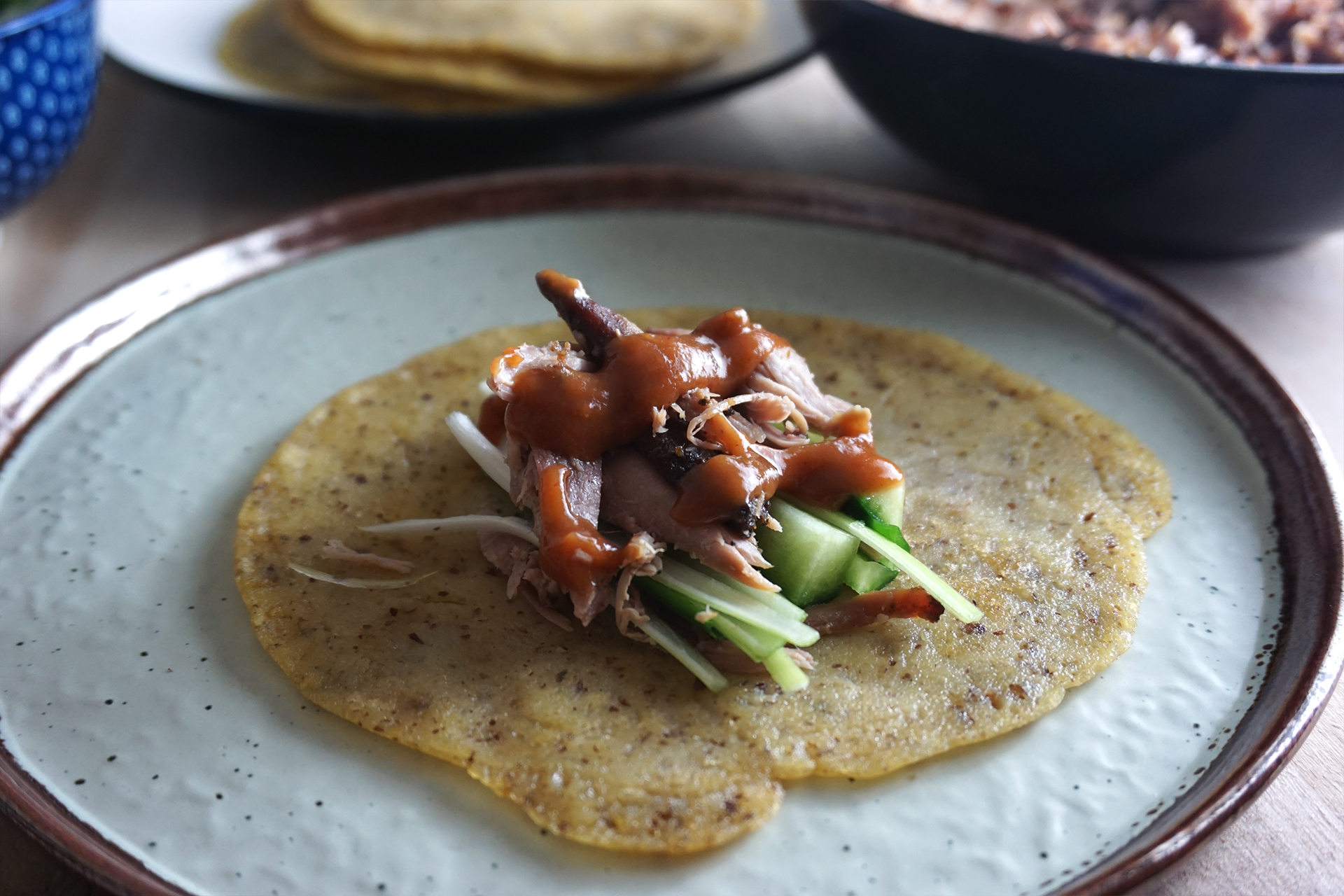