When did this happen!? The completely gluten free (and vegan) Cookies and Scream opened up a new branch on Holloway Road! I was walking down the street from Islington, a walk I do nearly every day, and there it was! Right in between Highbury & Islington and Holloway Road tube stations. According to google it’s been there for at least a few weeks so how have I been constantly walking by without even noticing!? I just don’t know, but I’m really excited to have this place open up at my doorstep.

Islington has just outdone itself (yet again) as one of the most amazing gluten free heavens in London. Seriously the gluten free scene has been growing and growing here during the last few years. I don’t ever want to leave!! lol With a few other completely gluten free places such as Artisan Gluten Free Bakery, Beyond Bread, Pho and Niche just up the road and a huge offering of gluten free friendly restaurants like Bird, Tierra Peru, Nando’s, Cabana, Wahaca and many others… we are truly spoiled for choice! I never thought I’d see this day when I first went gluten free, years ago.

But to get back to Cookies and Scream, They’ve had a stall in Camden Market for a few years already and although I live relatively close, I have only ever paid them a visit once. With Camden being so incredibly touristic these days, I tend to instantly regret my decision each time I set foot there… so I never really make it to the food market. ? I stick to my favourite clothes shops right by the station or head straight to Regent’s Park instead.

Also, I have to admit that my first experience at the Camden branch (a few years ago) was not especially memorable. To be fair it was at the end of of a cold winter day, near closure, there was barely anything left (and what was left had probably been sitting there for some time). I didn’t feel like it was worth the money at the time and although I did want to give them another try, the incentive to fight through the Camden crowd to do so just wasn’t there.

And well, to put it mildly, let’s just say I’ve been missing out! My boyfriend and I stopped by yesterday and sampled a few things – we shared two milkshakes (salted caramel and cookie dough) as well as an apple and cinnamon cake – which were all incredibly delicious! The portions were huge (thank god we had just been walking for 5 hours ?) and as a non-vegan, I can honestly say that their milkshakes and ice cream taste as good as the ‘real thing’. Unlike other dairy free versions I’ve tried in other places before, I couldn’t really tell it was vegan at all. And the cake, which they warmed up for us first, was so yummy; great moist texture and full of flavours. Again, I couldn’t tell it was vegan or gluten free and neither could my non-coeliac boyfriend. 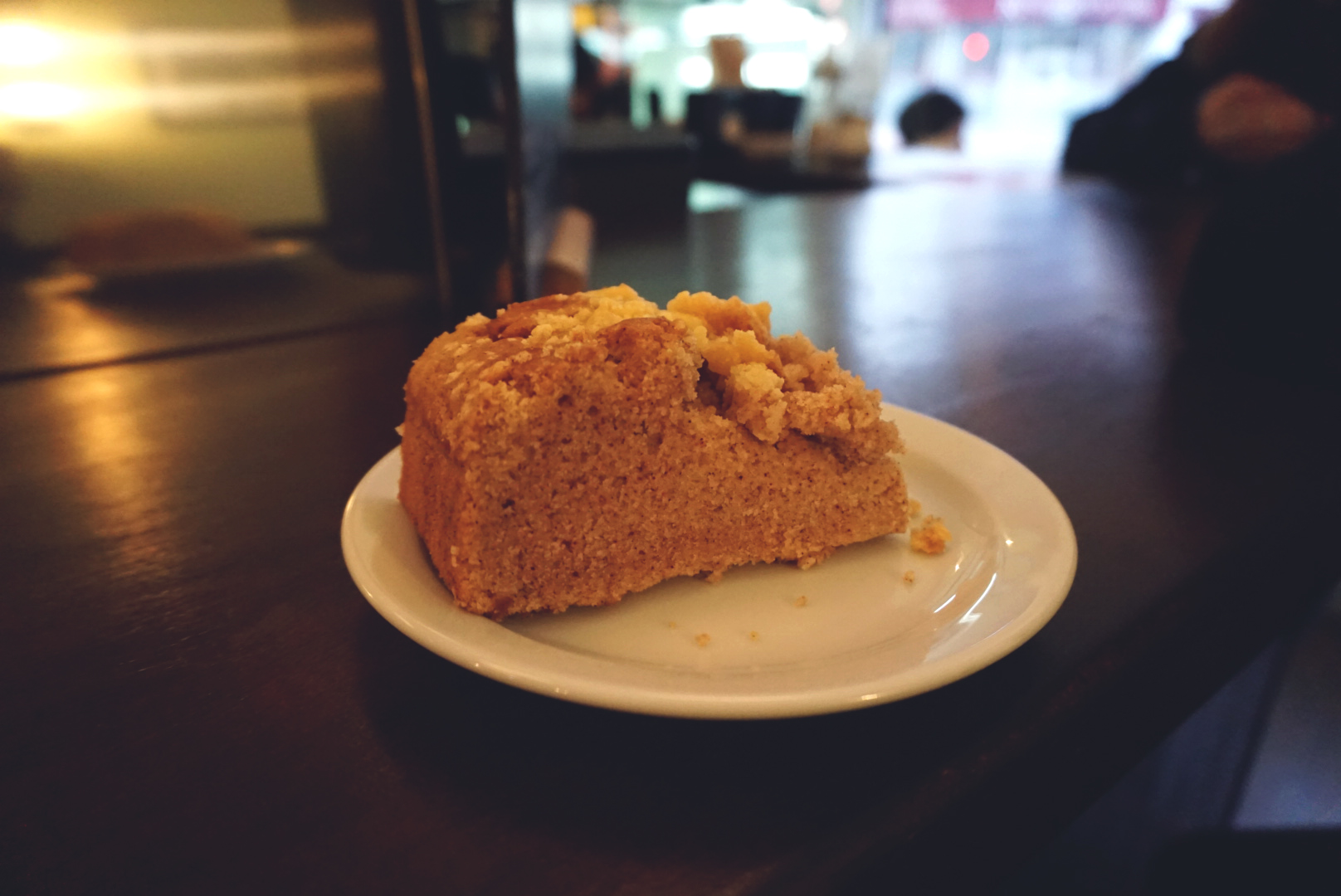 So all in all, well done Cookies and Scream, you officially have two new fans!!

Glancing at the menu, I’m also looking forward to trying everything else from cookies, cakes, pies, doughnuts, brownies, etc. They even have cookie/doughnut sandwiches which sound especially interesting! As if it wasn’t written big enough, I only spotted that on the menu after ordering otherwise I would have most definitely gone for that! lol

On a random separate note, isn’t Cookies and Scream such a cool name!? 😀

I finally got to try the doughnut ice cream sandwiches and OH MY GOD… it’s by far the best thing I’ve ever had in Cookies & Scream! Seriously they’re amazing! 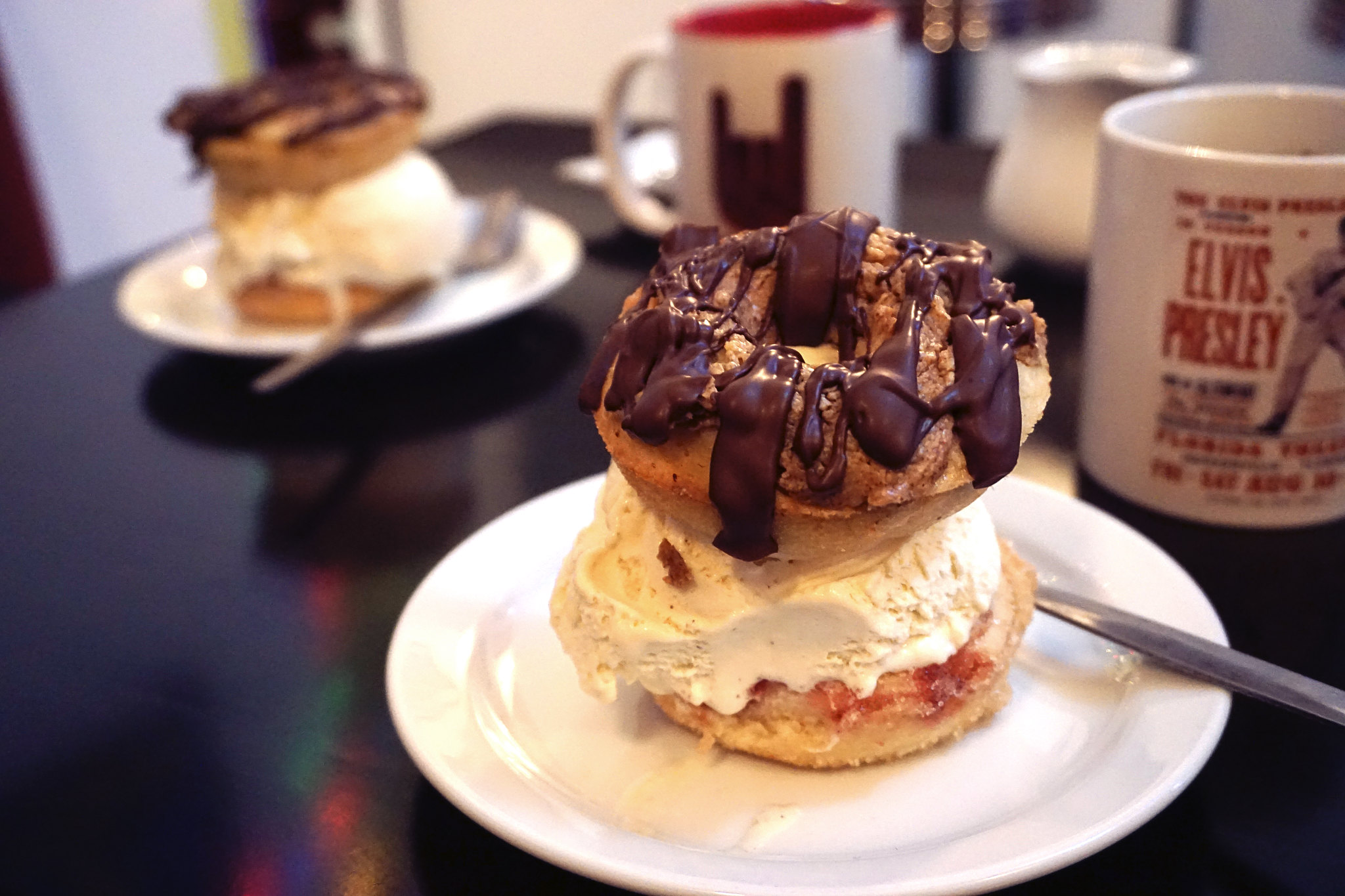 Just look at them! 😀 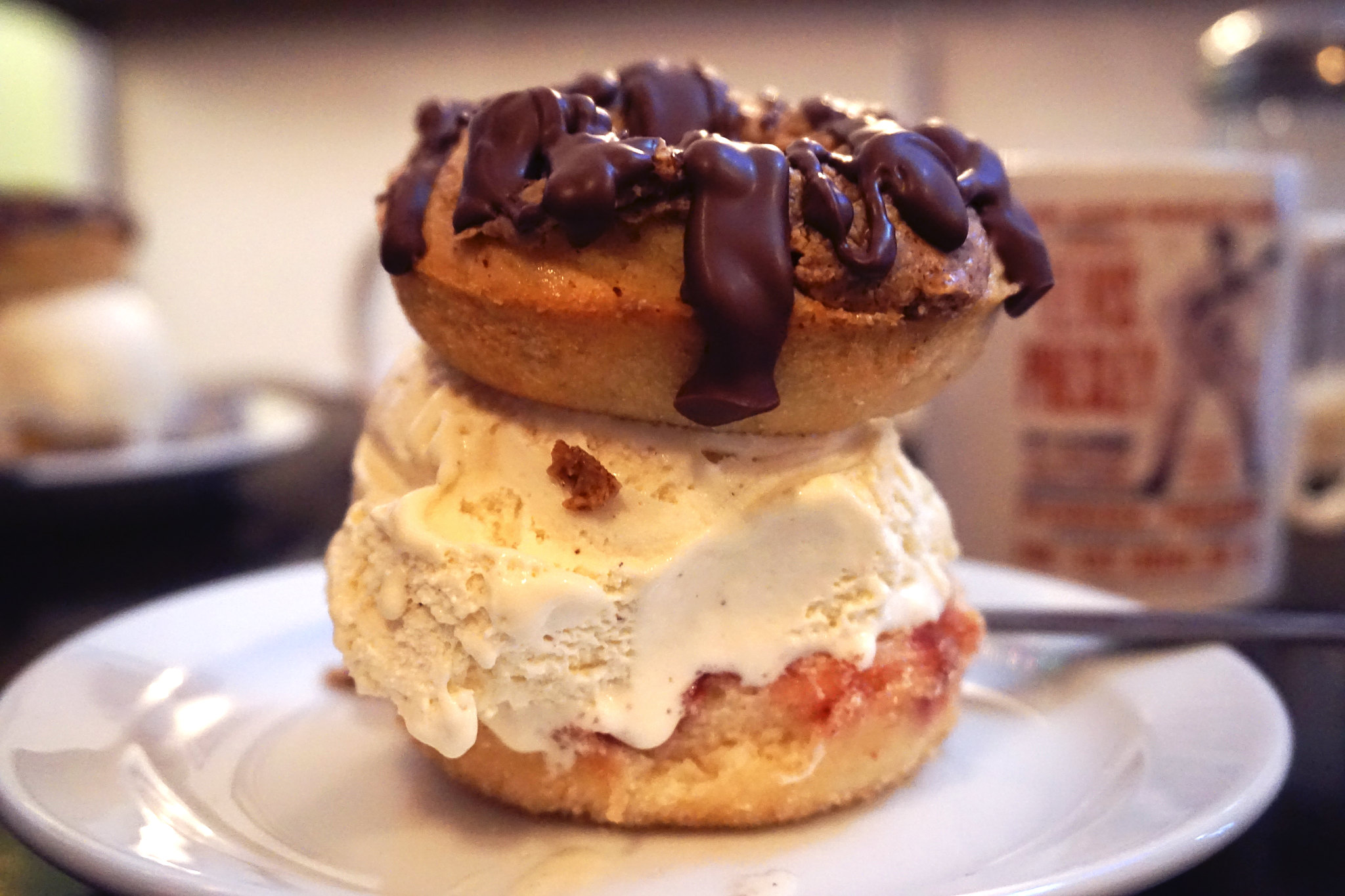 The jam and cinnamon sugar doughnut (at the bottom) was especially awesome so I definitely recommend going for that one! I loved them both though. They had a good texture and the ice cream was yummy too. Altogether they formed a perfect combination.

I also tried the cookie sandwiches a while back, with icing rather than ice cream. I thought they were nice as well, but the doughnut ice cream sandwiches win hands down in my opinion! It’s not even a matter of choice. 😉 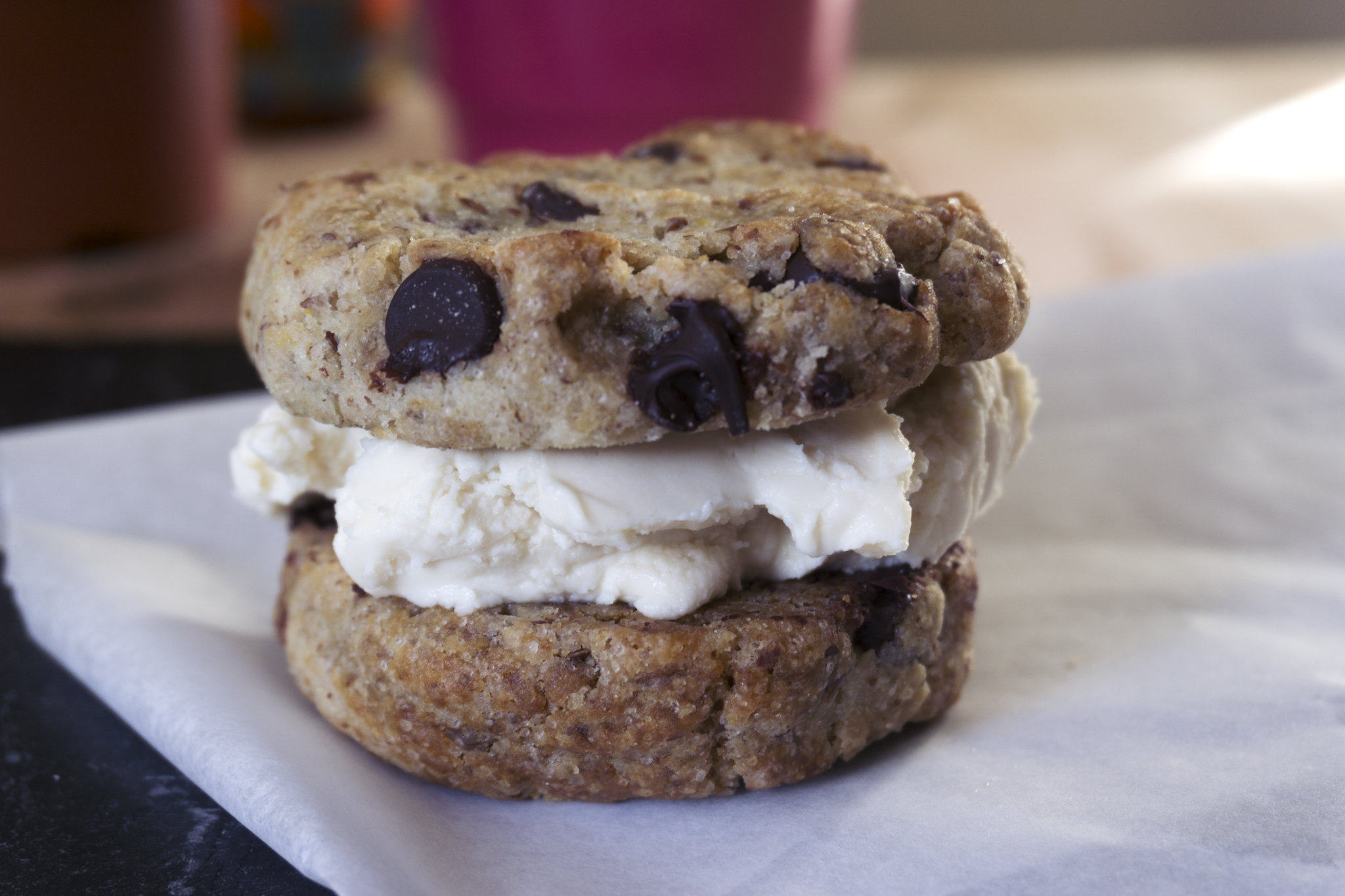 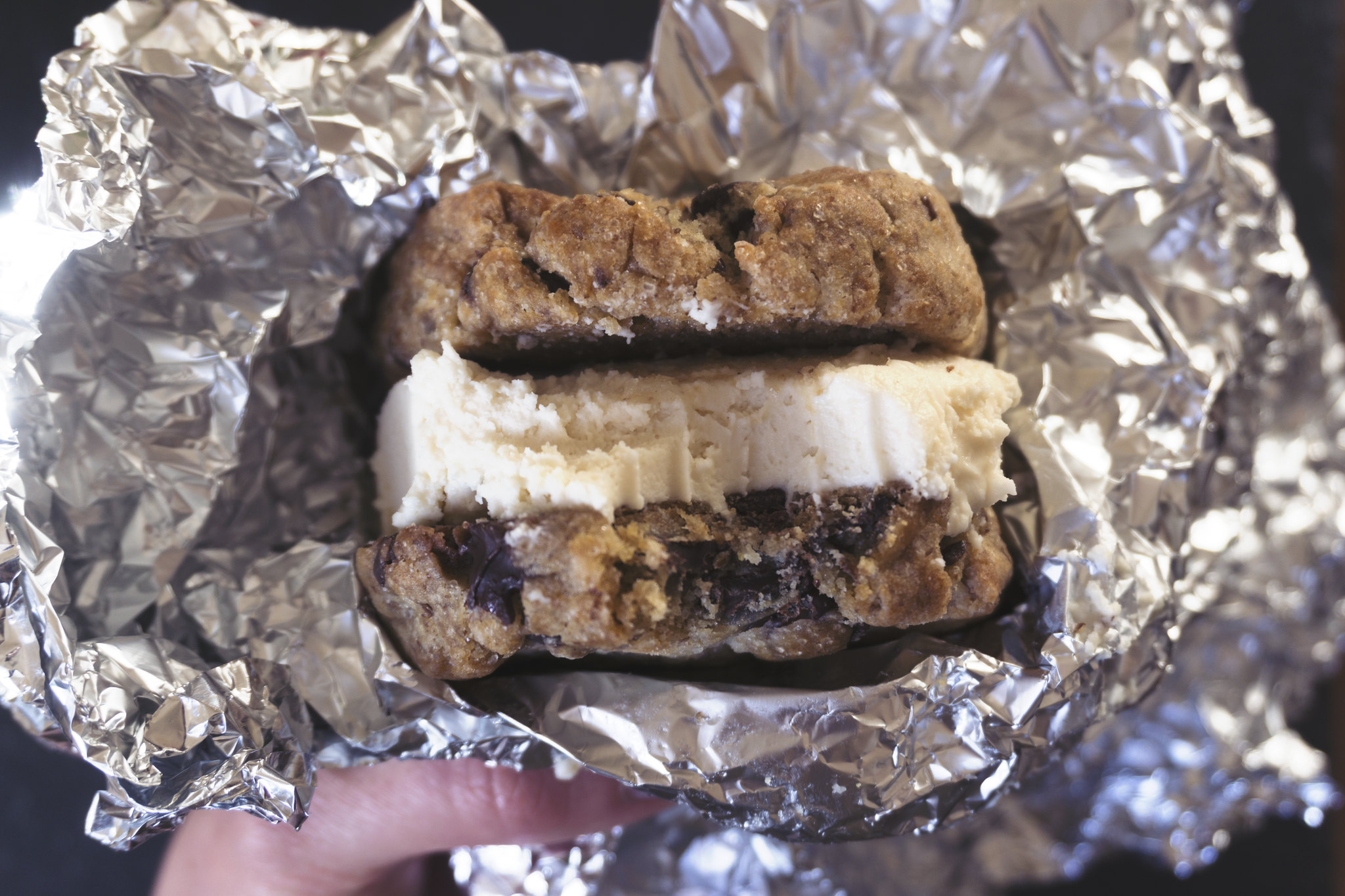